Skip to content
STAY UP TO DATE WITH THE IHA! JOIN OUR COMMUNITY eNEWSLETTER

Breathing Down Your Neck

I sat motionless on the hard ground with my legs folded under me, in no position to help me stand. I had just fallen from my horse and as I sat, slightly dazed and confused, I had only two conscious thoughts in my head. One thought was the basic instinct to review the last thirty seconds of my life, wondering how I got here in the first place, and the other thought was connected to something more visceral. I was wondering why my neck was hot, almost sweaty. I hadn’t injured myself too badly. My head was swimming a little, but the heat on my neck didn’t seem to be coming from me. Then it hit me… my horse was standing above me and literally breathing down my neck. Hot, wet air, like a bathroom mirror fogged by a hot shower, soaked my cold skin.

“Why was she there? Didn’t she just kick me to the curb? And what was she planning? Was she going to bite me? Stomp on me with her sharp hooves? Pick me up and throw me like a rag doll?”

I sat frozen, fighting an instinct to swing my arms about wildly and guard against the beast at my neck. But there was something about the breathing that stopped me. It had a certain kind of rhythm. Something suggestive of a thoughtful beast, not mean, not destructive, not even angry at me for jumping on her back in the first place. No… she was asking me something, or maybe telling me something. If you’re a spiritual person, you might sense she was communicating to me some deeper understanding of a world inside the horse, one I’d never seen before.

It was early in my career with horses and I didn’t know how to read the intricate body language a horse displays when fearful, or curious, or frustrated, or weary. I was a true novice who only saw the horse as a vehicle of the old west. A vehicle that could transport me to a time I wish I knew personally. Did you ever think you were born in the wrong century? I often did. And horses could take me back.

But this horse was showing me something I didn’t expect. Up until that point, I felt like a true out-west pioneer, riding the open spaces in the Montana mountain ranges. But at that point, I was at the mercy of a beast that outweighed me by over one thousand pounds. And instead of protecting myself, like my instinct suggested, I opened myself to the dreams of a world I never imagined existed.

Thoughts came pouring in, not my thoughts, I’d never had those thoughts before that I could recall. They seemed like they were her thoughts. At least that’s the only way I could describe it. I saw her thoughts. I heard her thoughts. And my life changed forever.

Now being a pragmatic person by nature, I often realize the power of my own imagination and make no claim to the horse transferring her thoughts to me through some spirit realm, but without any doubt, there are things I don’t understand. For instance, I don’t understand how a radio wave can be held in a receiver like a cell phone, then shot out again to be held by another phone on the other side of the planet, all within less than one tenth of a second delay. Maybe brains at some level can be like cell phone receivers that pick up waves from other transmissions. Or maybe it’s just my imagination, but either way, without my realizing it, my life was changing through observation of a world I didn’t yet fully understand.

The images and thoughts I observed, whether they were mine or not, suggested she was not a wise old soul, with thousands of years of relationship knowledge. They were more like the thoughts of a child. A basic kind of curiosity coupled with a moderate sense of fear and frustration. Maybe like an orphan child. It was as if she was wondering why I was there. Like she was wondering what I wanted. Like she was wondering what my intentions were and why I had chosen her as my subject. She seemed to be wondering what was going to come next. And underneath all those images I saw a deeper thought. A thought that submerged far below the conscious current. A life force that held and protected all life. Like I had some value in her eyes and her in mine. And we needed each other. At the time I didn’t realize it, but she was right!

From that day forward, perhaps through fear of not getting hurt or falling again, or perhaps from the visions I didn’t know existed in my heart and mind from that experience, I became ultra observant of the minutia of horse behaviors, even down to the smallest muscle fiber movements surrounding the eyes, mouth, jaw, and breathing patterns. Each horse I meet tells me more about the world they live in. The mental cage of the horse experience in our human world. A certain longing to be free coupled with a longing to be loved, protected, and engaged with, in positive experiences. All of which we, as humans, can provide them.

These desires are not unlike our own desires. In fact the more I see, the more I realize that the horse is in fact much like the human, albeit a young human, maybe two to four years old in consciousness. She feels emotions. She remembers the past and tries to learn from it, but struggles because powerful emotions drive most of her behavior and all emotions are primed and ready to fire. Unlike the adult human, who can learn to suppress emotions and train ourselves for new kinds of reaction in certain circumstances, the horse cannot. Not to say they can’t be trained with the help of a human, they absolutely can, but on their own, they will react with an instinct to circumstance instead of plan ahead. Their future projection of problem solving is limited. They truly don’t plan very well.

They do see into the future, but not very far. They see that the grass is greener on the other side of the fence, suggesting that they see beyond their current state of being and long to be somewhere else. They also see the future pain of losing a loved one and therefore hold on tightly to their companions. They may even dream of a future where they reunite with someone pleasant, or something pleasant. Like a warm summer day compared to a cold winter month. They certainly remember where home is and often try hard to get back there when sent far away. But they don’t dream of building a steamboat or traveling to Europe. They often merely dream of life without death and when death enters their dreams they tell you.

But death was not in the dream I had with my horse breathing down my neck. Not at that moment. A few moments prior perhaps, but in thatmoment life began to emerge in me. A new life I felt compelled to follow with all my heart. In a sense, the horse was asking me to honor her, to honor all horses. Her submissive behavior didn’t suggest I could trust her for a safe ride… it suggested I could trust her to learn if I was willing to learn and willing to lead with integrity. If I was willing to teach her with more regard for her state of mind, with more regard for her species, with more respect for the relationship between man and beast. And the message in my own heart, whether or not she planted it there was… if I would share her message with the world.

And in it all, as I come back to the origin story with my horse breathing down my neck, I began to see they need us. They need us just as much as and we need them. I needed her to transport me to another century. And she needed me to share her story. She needed me to protect her against the true beasts of the world. The destroyers of life with no regard for that life. I’m not speaking of hunters, who take a life to feed their family. I’m talking of sportsmen who take a life or use life to honor their own significance. To prop themselves up in the minds of men. The horse did not ask to be apart of the human experience but she is also not asking to be set apart from the human experience. She’s asking to be regarded as a living, thoughtful being. To be treated with respect. And that is something we can all offer.

I will never forget that young mare breathing down my neck and I’m ever grateful for the path she set me on.

Learn more about Don and his program, Mastery Horsemanship, by visiting his website here. 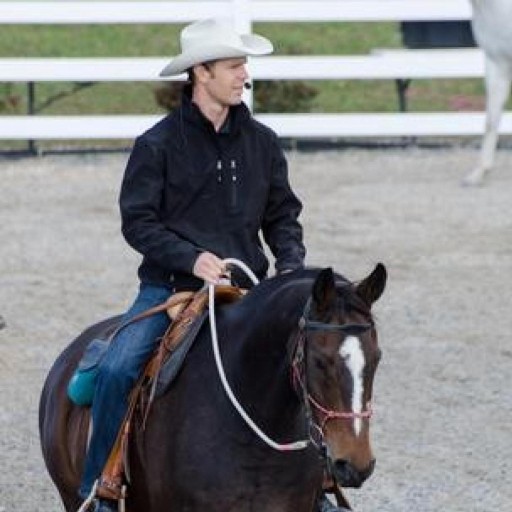 Don Jessop, a Montana native, is a master horseman and teacher who travels the country helping people with their horses while improving upon his horsemanship skills. He is the author of the book "Leadership and Horses". Don and his wife Rachel co-own Mastery Horsemanship, an Endorsed Program with the IHA.